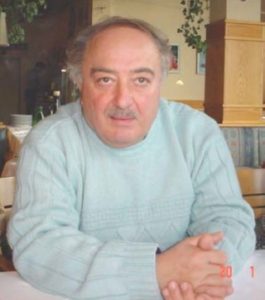 Education: Graduate Greek Elementary and Greek High School where he received extensive Classical Greek education in the years 1953 to 1965, a period of intense Classical erudition in Greek Education, Professor Pappas was one of the most distinguished students of Sciences on high school aptitude tests of special skills and IQ, as a student ranked in the genius category in Physics, receiving one of the highest worldwide and the top highest score in his country in the 10-year history of the School Aptitude Center of the Athens Prefecture. Greek State Scholarship for Doctoral studies, Fulbright Scholarship for post Doctoral Research

Graduation: Graduated from the Mathematical Faculty of Athens University 1971, in Advanced Mathematics.

Post Graduate Studies: After completing his military service (1971-73), and holding a Greek State Scholarship, Professor Pappas pursued post-graduate studies leading to a PhD and then pursued research in Theoretical and Mathematical Physics at the University of London, the Imperial College, Queen Elizabeth College and the Queen Mary College, Greek State Scholarship for Doctoral studies, Fulbright Scholarship for post Doctoral Research.

Majoring In: Structure of Space Time, theories of Gravitation, General Theory of Relativity, and Special Theory of Relativity. His PhD thesis in Space Time Mathematical Physics, (titled : Τhe Six Dimensional Space in Physics) completed in 1979, is an extension of the Theory of Relativity from a four dimensional manifold to a six dimensional one for the first time. In his pioneer PhD Thesis, the author treated time as a completely equivalent and symmetrical structure to space, producing naturally a total of six dimensions for the space and time. Since the first publication of the six dimensional theory by Professor Pappas in 1975, there has been a major interest among the Physics Community for multidimensional theories in high energy physics. As a result of his PhD thesis completed in 1979 and the published extracts in scientific journals, he received a Honoured Doctor of Philosophy Degree with full marks from the Physics Department of the University of Athens in 1984.

Research: In 1980 after completion of his PhD thesis and research, Professor Pappas has focused his work upon the realization that the actual background of Relativity Theory that he always questioned (and really of any other of Space Time Structure theoretical system) is indeed Electromagnetism and Electrodynamics. As a result, Professor Pappas has directed all his research activity toward investigating a realistic Space Time Structure of Nature by experimenting with Electromagnetism and Electrodynamics.

Greek State Scholarship for Doctoral studies, Fulbright Scholarship for post Doctoral Research
Professor Pappas collaborated with the Physics Department of Athens National University 1978-1982, the Physics Department of National Technical University of Athens 1982-1986, where he transitioned from a Mathematical and Theoretical Physicist to an experimentalist in Electromagnetism, carrying various fundamental experiments. Also, collaborated with Professor Graneau of the National Magnetic Laboratory at MIT, with preliminary research and collaboration starting in the summer of 1985. The collaboration was extended to the Center of Electromagnetic Research at Northeastern University. A research award was granted by the Fulbright Program, USA, and Professor Pappas carried out a research project on Longitudinal forces in 1987. Professor Pappas has performed experiments involving physically non-closed circuits, such as, measuring for the first time forces between radio and microwave excited antennas; experiments with fast transient electrical discharges in circuits, a phenomenon that the initial electric current flows in only one part of the circuit (effectively, involving interactions from a non closed circuit to a non closed one), which received extensive publication for the first time in the world scientific literature.

Also, as a result of this research was the discovery of Excessive Energy Balance in Arcs (currently a hot topic), Gravitational Forces and the existence of apparent Faster-than-light Transient Signals, which received world publicity by mass media in the late 80’s.

Publications: Professor Pappas has contributed as an author to numerous pioneering publications in critical areas of Physics, attends International Conferences, is regularly invited to deliver lectures in variety of disciplines all over the world, being ranked as one of the most travelled and multi talented scientists around the globe. He has lectured for many years in various universities and scientific organizations and he is currently active teaching both Physics and Mathematics at an undergraduate and graduate University level. His current hands-on laboratory experience, includes being the first Director of TEI Kalamata’s) and Responsible Organizer of its Physics Laboratory operation.

Consultant-Reviewer: Scientific consultant to the Lightning and Pulse Transients suppressing industry, Supervisor for various Professional Institutions at graduate and post graduate level dissertations for both Mathematics and Physics.

From the early days of his Academic career, Dr Panos T. Pappas was appointed Referee and Reviewer of Electrodynamic papers submitted to major scientific journals like Physics Letters A, Physics Essays, etc. for articles on Electromagnetism.

He is also member and advisor to a number of Scientific Institutions and Societies: Greek Mathematical Society, Greek Physical Society, General Relativity and Gravitation Society, International Tesla Society, and in 1996 was elected correspondent member of the Russian Academy of Sciences (St Petersburg).

Recent Advanced Research: His present research objective focuses on current to current, or charge to charge Electrodynamic macroscopic interactions, leading to nuclear participation in chemical activity, i.e., low energy nuclear physics. Professor Pappas is the warmest supporter of the Ampere Cardinal Law of Electrodynamics, which he recalled to international attention of the Physics community with a large number of publications since early 1980, after a 100 year period of the Law’s oblivion. Professor Pappas believes that this law is a major law of Electrodynamics and he has proved that it covers a wider range of applications and uniquely is the basis for new atomic models, such as the ring model for the elementary particles, electron, proton, neutron, which explains cold and low energy nuclear activity- critical for biology, geology, medicine, and metallic metallaxis.

Dr. Pappas is working also on the electrolytic dissociation of the water, not only as a means to produce abundant hydrogen gas, but also as a direct proof against the commonly accepted laws of thermodynamics, publishing it, pre-announcing and publicly demonstrating by experiment his views.

Pioneer Patents: Professor Pappas holds a number of active international patents, currently used in atmospheric protection industry (lightning protection systems) and medicine, in electrodynamic applications, including biological and medical applications of non-closed circuits, the dispersion of ions by non-closed-circuit electrodynamic forces, as well as, patents for causing nuclear resonance and activation by ultra fast and very high amplitude magnetic pulses, theorizing thus the active participation of nucleus in biological and chemical reactions, and relevant Pulsed Electromagnetic Field PEMF medical devices in production and operation world wide, are state of the art having the highest instant power – of the order 2 Gigawatts.

Most Recent Advanced Research and Related Achievements: Starting in early 80s with the study of lightning, Professor Pappas efforts have concentrated on the chemical and biological effects produced by ultra fast rising electrical current pulses with devices of his own invention – the PAP-Ion Magnetic Inductor (PAPIMI), holding many national and international patents. The invention of PAPIMI device has received several Medical approval by the European Union, CE0044, TUV NORD certifying body, by the SECRETARIA DE SALUD state of Mexico, by the Russian Federation GOSSTANDART Medical Certificate, and by the FDA, USA via IRB clinical investigation as a Principal Investigator.

This invention has been officially acknowledged as a medical device that has, also I effected remediation in a broad spectrum of applications after fourteen hard years of effort and research. Many of the Professor Pappas research papers (and in particular the Nuclear Oximutation of Oxygen) are the outcome of the research from this invention.

The PAPIMI device is available world wide, has been presented in scientific and medical conferences. It is recently theorised that the PAPIMI device causes NMR as well as EPR, and thus may trigger or enhance low energy nuclear activity in organic and non organic matter, leading to Nuclear Biological Transmutations as principally referred by Louis Kervran and by the Nobel nominee Hisatoki Komaki. (More details may be found in the site: www.papimi.gr) The PAPIMI Device particularly leads to the hypothesis of the dual role oxygen – the so called by Pappas “Oximutation”, a nuclear reaction of Oxygen with Na as opposed to Oxygen’s known chemical reaction, called Oxidation.

The PAPIMI Device led the investigation (as a corollary of the inter-cellular energy exchanges) to a greater depth with the possibility of nuclear-transmutational energy being the basic means of motive power in the animal kingdom. The cell is considered for the first time as a controlled nuclear reactor, transforming nuclear energy directly into electricity, based solely on known physical principles. All the other forms of known nuclear reactions transform nuclear energy only into heat. This is a major scientific understanding that bridges nuclear theory and the energy production for the physiology of the cell in all human and animal organisms.

In the years 2001-2004, Dr. Pappas was the keynote speaker for several International Scientific Symposiums for the Medical Aspects of the Pulsed Electromagnetic Fields (PEMF) and particularly PAPIMI device.

While there has been many medical “miracles” by the PAPIMI, the much published sudden come-back of the world ski champion Herman Meier (twice World Champion in two weeks – twice Gold Victory in the World Cup in February 2003) is attributed totally to the miraculous “two month healing power” of the PAPIMI device where it was suggested by experts that it would be two years or more for a likely possibility. It is theorised that the PAIMI triggered excess nuclear energy made available to him (as it did in horse races 73 out of 75 horses became winners in a row), confirming impressively and once more the above hypotheses for the cell physiology.

Professor Pappas has been nominated for the 2004 Right Livelihood Award.

Founder Member of the World Association for Cancer Research (WACR) in the year 2006.

For relevant references concerning the above, please visit: